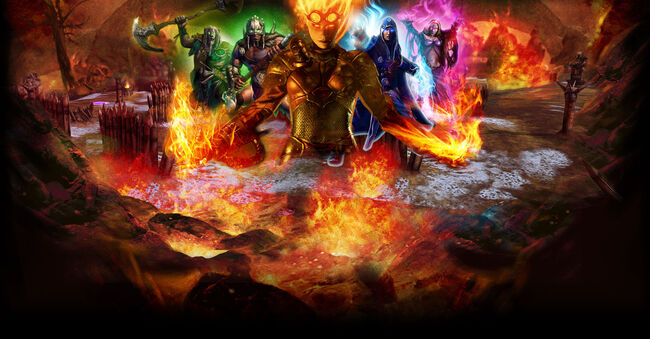 This wiki will be used as a sandbox to help other wiki's until further notice.

Announced by SOE: on March 28, 2014 Magic the Gathering Tactics will no longer be supported. The game is no longer available. The main pages of this wiki is kept intact for historical purpose until further notice.

The inclusion of collectible mechanics (with rare and mythic cards) allows for one of the best things about Magic the Gathering: deck building. When combined with talent trees and new board mechanics, this brings a fresh experience to the world of Magic the Gathering where cards combinations and talent points can come to life in a 3D battlefield.

Victory or defeat hinges on what deck and talent trees you build, what and when to play, where and how you place things, and the normal randomness plus surprises your opponent can deliver inherent in traditional Magic The Gathering. This gives a complete overall thrill of victory plus the thrill of progression in cards, skills, and new deck ideas.

Retrieved from "https://magicthegatheringtactics.fandom.com/wiki/Main_Page?oldid=5388"
Community content is available under CC-BY-SA unless otherwise noted.